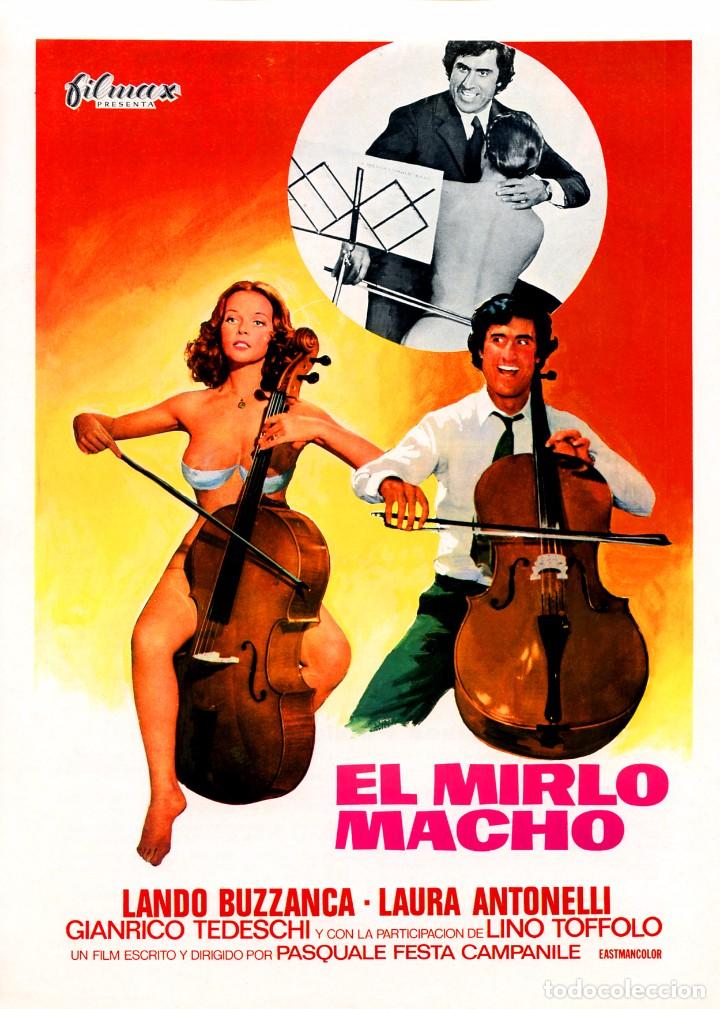 I saw Il Merlo Maschio (translated as “The Male Blackbird,” but also released under the title X-Rated Girl in English-speaking territories) a few months ago. This is another sex themed comedy directed by Pasquale Festa Campanile, of Libertine, Adultery Italian Style and Check to the Queen fame. This one was never ported to blu-ray and the DVD is out of print. Based on the absence of any HD home media release, as well as the subpar image quality of the copy I saw, plus the lack of high resolution pictures online, I believe this film is long overdue for a restoration. Whatever its shortcomings, I hope it gets one soon.

That said, I have mixed feelings about this movie as a whole. Even taking into account that the upload I saw is of mediocre picture quality, most of the fantastic production values of PFC’s earlier films seem to be gone. There’s no lavishly designed sets akin to Margaret’s mansion and Franco’s bachelor pad. The retro-futurist/art deco furniture is missing. There are no stylish outfits for the women to wear. Even the soundtrack is sparse and forgettable. In terms of aesthetics, it’s just not on the same tier as any of the late ’60s Italian movies. It’s a shame, but I guess that ’66 to ’69 window was just a spectacular example of lightning in a bottle, where all the right people were in place to make some of the most beautiful films ever shot.

The plot is somewhat better. It’s about a frustrated musician named Niccolo. (Lando Buzzanca, whose performance is by far the highlight of the movie. He left a great impression in La Parmigiana as well.) He’s upset that no one remembers his name, nobody notices whether he’s around or not, and he never leaves an impression on others. Niccolo’s problem is exacerbated by recurring nightmares of playing his cello to an audience that’s unable to hear any music coming out of it. As it happens, the only person who appreciates the poor guy is his devoted wife, Costanza. (Laura Antonelli, also from Devil in the Flesh.) She often asks Niccolo to whistle her a song like a blackbird, hence the name of the movie. At first glance, the story seems to be setting up the usual “appreciate what you already have” / “isn’t wifey’s love enough?” trope, but thankfully things take a left turn.

Niccolo realizes during a doctors visit that he enjoys other men’s reactions to seeing Costanza naked. He likes watching them marvel at her beauty, knowing that he has what they covet. This newfound source of ecstasy translates to greater confidence both in and outside of the bedroom. Niccolo begins making friends at work. He tells off his overbearing orchestra director and is even inspired to write his own opera. In many scenes, he’s filled with a manic energy: making love, developing naked photos and composing original music simultaneously. Eventually, he starts forcing his wife to strip in front of various men in several different scenarios, often to comedic effect. Unfortunately, Costanza doesn’t share his fetish and feels degraded performing it, which is the main source of conflict throughout the story.

I feel like this movie had so many ideas but they just don’t really come together in a satisfying payoff. I guess it was the poster, but I thought maybe Niccolo was going to “play” his wife like an instrument. Y’know…blow her vagina like a trumpet, strum her cheeks like a bango, tickle her clitoris and nipples like piano keys. And to be fair, there was one scene that did play into that idea, but it was so quick you could easily miss it. I thought like, maybe our hero might even find a way to manipulate the tempo and pitch of his wife’s various erogenous screams, laughs and groans by altering his technique–essentially turning her into a living instrument. I had this idea in my head that the movie was going to end in exactly that manner, with Costanza being played to a packed stadium. I thought maybe Niccolo had even written his own original sheet music notation for how to recreate this precise sequence of female squeals and coos. It seemed obvious to me at the time that this would be revealed as the opera he’d been working on all along. His masterpiece would inadvertently culminate in the guide to giving a woman the most intense orgasm imaginable, and it would be presented to the masses as high art in the field of musical theater!

Even putting aside my own perverse wish fulfillment, the plot is a let down any way you slice it. I mean, at one point Costanza is so distraught by the forced exhibitionism that she attempts suicide and this is hardly addressed. In the end, the climax of the movie involves the wife stripping naked in front of an audience who came to hear an orchestra concert. She doesn’t do anything special and neither does Niccolo; there’s no difference between this scene and every other sex game they’ve played up to this point. Niccolo calls the audience “f@ggots” for not reacting in a manner he deems appropriate to his wife’s nudity, but I didn’t find that particularly funny or creative. It’s a pretty clear cut example of an anti-climax, especially when the setup promised to deliver so much more. I hate to criticize a film for not being what I wanted it to be, but I couldn’t help but feel like if the film had gone the way I just described, it’d be remembered as a kinky masterpiece akin to some of Campanile’s other work.

Overall, Maschio is funny and enjoyable to watch through once, but doesn’t have the strong characters, the gorgeous art direction, nor the social commentary which made Libertine, Queen and even Adultery so special. I could relate to Mimi and appreciate the way her story pointed out double standards towards women with regard to sex. Silvia and Margaret were complex, and it was up to the viewer to determine what their exact feelings were towards each other. Libertine offered some great lessons about navigating the kink scene safely. Queen explored the nature of submissiveness: from the motives of people who submit to others, to whether a sub is actually in control of their dom. I didn’t get any of that depth here, though it is a further testament to PFC’s imagination for bizarre sexual escapades.