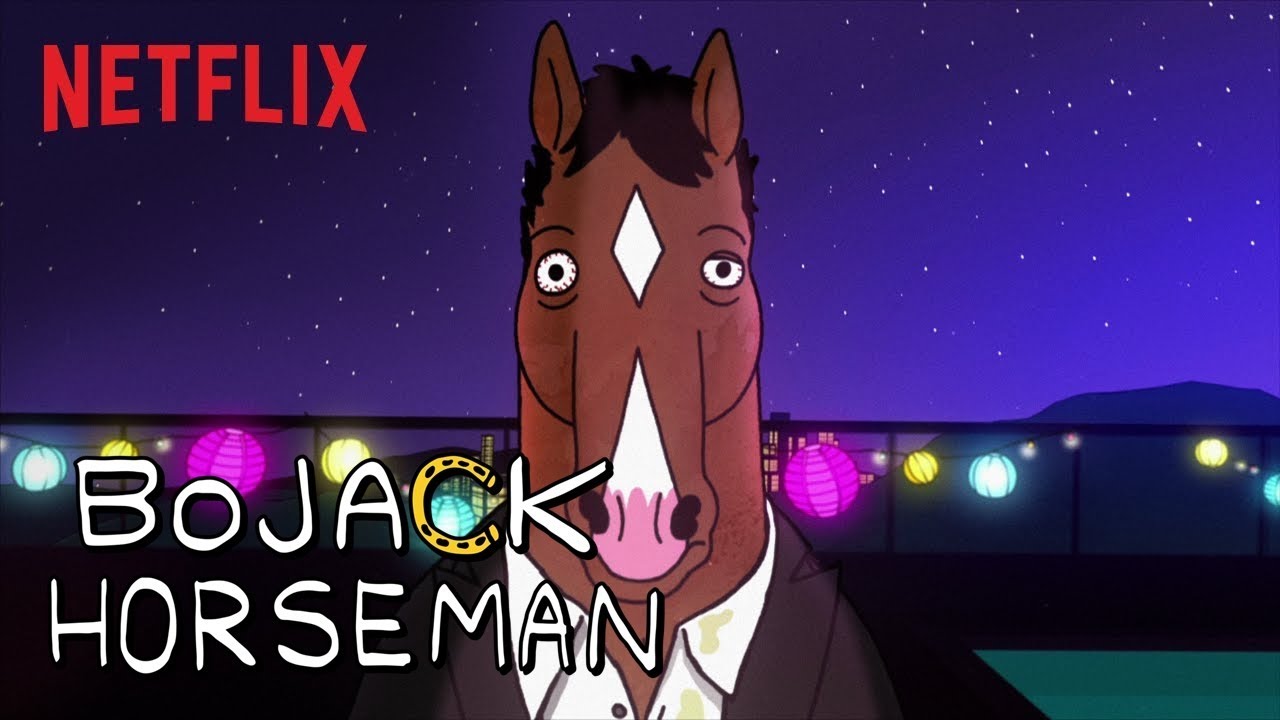 So, Bojack Horseman. This is a really special show to a lot of people, myself included, and I’ve been meaning to put my thoughts to paper for a long time. It’s the most honest depiction of depression, anxiety and regret I’ve ever seen, and since I’ve struggled with all three I can’t begin to describe how much I love it for that reason. I could point to every single character at one point or another in their journey and say “I’ve been there, that’s me.” There’s really no other work of narrative fiction I can say that for, so I consider it a monumental achievement. This is a program which has been with me through a really transformative arc in life and I’m not sure I would have weathered as well without it. This is a show I really want to do right by, so I’ve put off working on this essay until the series concluded and I could do a full rewatch just to make sure I wouldn’t miss anything.

I believe the best way to break down Bojack Horseman and what it means to me is to begin with the circumstances which brought the series to my attention 6 years ago. Then I will look at each character and their relationship to Bojack himself and finally offer additional thoughts season by season.

Without going into too much detail, the 2014-2015 school year at college was probably my rock bottom. My roommates at our apartment whom I thought were my friends started to gang up on me and reveal secrets I told them in confidence to other people to hurt me. I felt like my other group of friends were excluding me from get-togethers but still leading me on when I tried to confront them about it. My gender dysphoria had gotten to where I couldn’t ignore it anymore and I never got therapeutic help for all the stuff that had happened in secondary school so that was constantly eating away at me.

As the year went on, I tried to move past these things by dressing in a feminine manner in private, but my roommates found my girl clothes and mocked me for it. I tried to bury myself in discussions of my favorite music online, but I ended up turning off a lot of the people I wanted to impress due to my zealousness and the age gap between me and most other posters. I tried meeting new people in real life by going to bars (which I do not recommend by the way), wound up talking to the wrong girl and got physically assaulted by her jealous psycho boyfriend as a result. That night I seriously considered throwing myself over the bridge on the way home, and cried myself to sleep. (To add insult to injury, the cops never did anything about it.)

I felt like my life sucked, had always sucked and always would suck. Since it was becoming clearer and clearer to me that the person I was interested in was avoiding me, I further internalized that my bullies were right and nobody would ever return my affections. I convinced myself that I was unlovable and no matter what I did people would always be able to sense that about me, so why keep trying? Out of options, I finally resorted to the pathetic outlet of posting depressing “woe is me” statuses online. I look back on those and cringe at how bleak they are. But, as pitiable as this cry for attention was, some good came out of it. Jove, my peer from secondary school, saw what a bad place I was in, reached out and offered his friendship at the time I needed it the most. He listened to me unburden myself about everything that was going on, extended some genuine encouragement and made plans to see me in person for dinner and a concert once the Fall semester was over.

Had it not been for Jove’s help, and our date to look forward to, I really don’t think I would have made it through that semester. Over the winter break, he recommended Bojack Horseman specifically because of the scene between Herb and Bojack, since I had told him earlier that I didn’t think I could ever forgive some of my high school tormentors. I gave the show a quick binge over the next few days and enjoyed it ok but it didn’t immediately blow me away. I cried when winter break ended that year, knowing I had to leave him and my other friends from home to go back to the same dreary situation at college. On the last night before heading back to school, I rewatched the first (at the time, only) season while coming down from a trip and it left a far deeper impression.

Watching Bojack Through the Years

It was during that Spring ’15 semester that Bojack really grew on me. I watched it again many more times throughout the next few months. I went back and forth between favoring Diane and the titular character himself more with each viewing. Diane was a writer like me, and an attractive woman as I hoped to become. But Bojack himself was a man riddled with mistakes and self-loathing which really spoke to me in that troubled period of my life. I related to his regret, I felt that I too had blown it with important people, that my life had been a waste up to now and I needed to change right away if it wasn’t already too late. Bojack’s projection of Diane during his own drug trip in Episode 11 was the line that hit me the hardest: “It’s not too late, it’s never too late. It’s never too late to be the person you want to be. You have to choose the life you want.” That filled me with the hope that, despite it all, Bojack and I could change.

Fortunately I didn’t have to wait long for Season 2. It came that summer, when I was in a better but still troubled place in my life. By that point I’d determined for certain I was going to go through with transitioning and was dealing with the mixed reactions from friends and family as I came out to each of them. That was scary, and at times defeating, but it was exciting meeting other transwomen in the meantime and refining my look. I remember buying new clothes and trying them on every night, going to support meetings and keeping in touch with Jove all the while. I watched the second season late one night when I couldn’t sleep and my new friend from the trans community was staying over. Coincidentally, I’d made the exact same mistake Bojack had with Wanda, inviting her to stay with me too soon, before we really knew each other, and we ended up breaking things off just as sourly as our TV counterparts did.

The rest of the seasons saw me through graduation, finally living as Cassandra, the rise and fall of my first major relationship and then landing with my current boyfriend. Like the characters on the show, there was confusion, doubt, false starts…but ultimately I landed in a far better place than when I had started. I saw the premiere of Season 6, part 2 sporadically in my spare time while my boyfriend and I were at a convention together. I remember watching the finale in bed next to him and just thinking about how far my life had come since the show first started 6 years ago. If you had told me how happy I could become while I was watching Season 1 for the first time I would never have believed you. Obviously a TV show can’t take all the credit for things working out, but the realism and familiarity of its characters and their struggles through the years certainly helped me feel less alone in dealing with my own shit.

I know I’m far from the only person who’s enjoyed this deep connection with Bojack. This show is special, it’s the kind of thing which comes around once a generation and helps to define the people who’ve witnessed it. For all these reasons and more, I consider Bojack Horseman to be the pinnacle of storytelling through the medium of television.