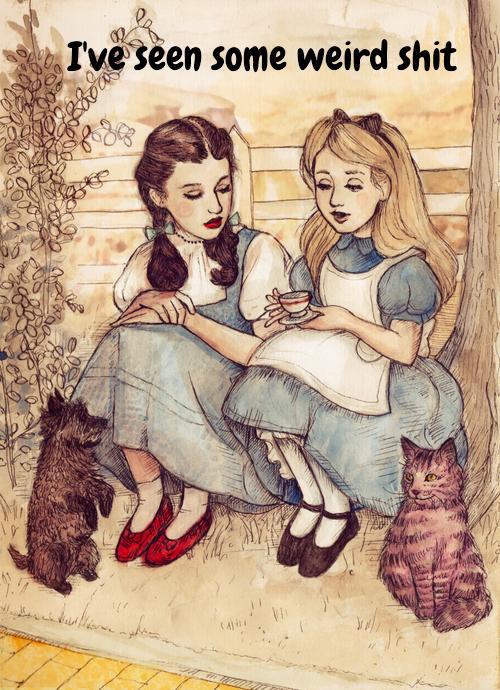 Alice’s Adventures in Wonderland and Through the Looking Glass are such beloved and timeless stories that there’s really not much for me to say that hasn’t been discussed already. Not only that, its headlong embrace of nonsense logic make any analysis I could offer somewhat arbitrary if not outright against the spirit of the book.

Something unique I can say about the series is this: I never read either of the Alice books as a child. I didn’t get around to doing so until just last summer, when I bought a beautiful illustrated binding of both stories in one. This happened in a completely roundabout way, where I first gained an appreciation for Lewis Carroll’s work by seeing the profound manner in which it impacted the 60s counterculture. From entire songs reimagining it, to (unused) album covers to beautiful tapestries, I wanted to see what some of my favorite artists had been inspired by. In college, I came back home for the summer and saw the Disney cartoon for the first time. I really loved it, despite some of the hardcore book fans accusing it of being a poor adaptation.

Personally, while I can now say I love the books too, there’s just something about the 1951 animated film that really clicks with me. (Besides the nostalgia for that all-around incredible summer when I discovered it.) Part of the appeal is definitely its streamlining of the story, excising a few of the tangents which weren’t my favorite in the books (Pig and pepper, mock turtle, etc). Then there’s the stunning animation (all by hand, they don’t make ’em like that anymore!) But more than anything, I recall it was Kathryn Beaumont’s wonderful portrayal of Alice herself which resonated the strongest. Her voice is so soothing, and her mannerisms (which the animators took from Beaumont acting out scenes in person as a reference) are often adorable. For example, in the garden scene, I love the way she politely stifles a yawn and confidently shrugs it off after her voice breaks. Alice as she exists in the books is fantastic, but for me the Beaumont portrayal felt more personalized and accessible.

All in all, the Disney adaptation quickly became my favorite animated film. More than that, it’s sort of my “go-to movie” in that it’s a quick watch that I can get into whether I’m happy, sad, frustrated or anxious. I enjoy it no matter what state my consciousness is in.

Making Her Own Way

According to the special features on the Blu-ray, Alice in Wonderland was considered for the Disney treatment since the 30’s, and went in and out of production many times until being completed in 1951. Because of this, there were more songs written for Alice than any other Disney animated film. This is partially why there are few show stopping numbers, like “Golden Afternoon” and “Unbirthday.” Most songs are like “Twas Brillig” and “A-E-I-O-U,” in that they’re short and almost part of the background score, because the studio tried to use as many as possible. Even so, a lot of material didn’t make the cut. Here is an awesome playlist of all those songs. They’re really cool to listen to, but I’m glad most of them were left out. One of the few that I wish had been included though, is “Dream Caravan,” which the Caterpillar was supposed to sing until they added “A-E-I-O-U” instead. I don’t know if it’s right for the Caterpillar himself, but it’s catchy and I’m sure they could have fit it in somewhere. (Perhaps Dodo could sing a few bars while passing by the White Rabbit’s house?)

The most significant omission was “Beyond the Laughing Sky.” Alice was originally going to sing this grand ballad at the beginning of the film. I cannot express enough how happy I am that this particular track was scrapped. To have Alice sing this would have been untrue to her character in my opinion. Not to mention an obvious (and unsuccessful) attempt to equal The Wizard of Oz‘ “Somewhere Over the Rainbow.” I personally think “Laughing Sky” is a little too schmaltzy and pretentious; I mean, what even is a “laughing sky” anyway? Not only that, it would have brought the film to a halt right at the start, when we desperately need to get to Wonderland. (One of my favorite aspects of the film and book is that the story is quick to get started.)

Luckily, Kathryn Beaumont had trouble singing this tune, so they wrote something new, and in my opinion far superior, with “In a World Of My Own.” (The melody for “Laughing Sky” would be put to far better use in Peter Pan‘s “The Second Star to the Right.”) This is a great example of art through adversity, because “In a World of My Own” gives the film its own unique tone and purpose. The lyrics express the desire to play around with boring rules and change how things work. It’s a nice song that sounds like something a real little kid would want, where “Laughing Sky” sounds too much like an adult’s romanticized take on that concept. “In a World of My Own” may not be as iconic as “Somewhere Over the Rainbow,” but nothing would’ve been. Better to do something new which services your own story than try to one-up someone else.

“Somewhere Over the Rainbow” is an adolescent’s dream about escaping the troubles and tediums of home. To put things another way, I see Dorothy being an extrovert and her dream world is tailored to that unique mindset. She wanted adventure in a new land and someone to listen to her. That’s why her fantasy contains grand set pieces and three devoted friends to keep her company. Alice didn’t need that, she just wanted to have fun with nonsense for a bit because she was bored of her sister’s dry history lecture. She is more of an introvert who notices the little things and loves the abstract. As a result, her fantasy is all about bending the laws of logic and physics. So, Alice needed her own unique song to get that point across early and contextualize the coming adventure. You’ll notice how the lyrics of “In a World of My Own” establish the idea of animals and flowers talking, which we’ll see later in her journey.

The Moral in the Madness

The lesson of The Wizard of Oz (at least the film version) seems to be that it’s fun visiting exotic locations but there’s no place like home. In other words, don’t take what you already have for granted. That’s pretty much spelled out for you. But what if the lesson of Disney’s Alice in Wonderland is that she wasted so much time obsessing over the White Rabbit instead of taking in this awesome fantasy land? Tweedle Dee and Dum were pretty cool, they just wanted to play games and tell her stories. Dodo could’ve been fun to sail with and run around in a circle. The Doorknob was mostly polite if admittedly unhelpful. The Cheshire Cat wanted to sing her a beautiful song. The Caterpillar just wanted to know who she was, taught her a poem and told her how to shape shift. The Mad Hatter and March Hare could’ve been fun if Alice had just rolled with their madness instead of forcing the conversation to go in a very specific direction.

Alice’s problem is she lets herself get frustrated by all these people because they don’t help her narrow, singular goal of finding the rabbit. What’s worse is, the few times she does meet up with the rabbit, he’s either ignoring her or abusively bossing her around. If that were not enough, it turns out he works for the homicidal Queen of Hearts. So forget about the White Rabbit, the White Rabbit isn’t worth the effort. Had Alice realized that sooner, she may have had a lot more fun with some people who were actually worth her time.

There’s a definite moral there, and one I wish I had learned earlier in life. That being, don’t chase after one person, no matter how intriguing they may first appear. Go at your own pace, be open to the unexpected opportunities in life. Appreciate the people who come your way on their own terms and make the best of them. Go with the flow and enjoy what comes to insure a great trip. You may not find that idealized someone, but you could also meet people who are just as good if not better along the way!