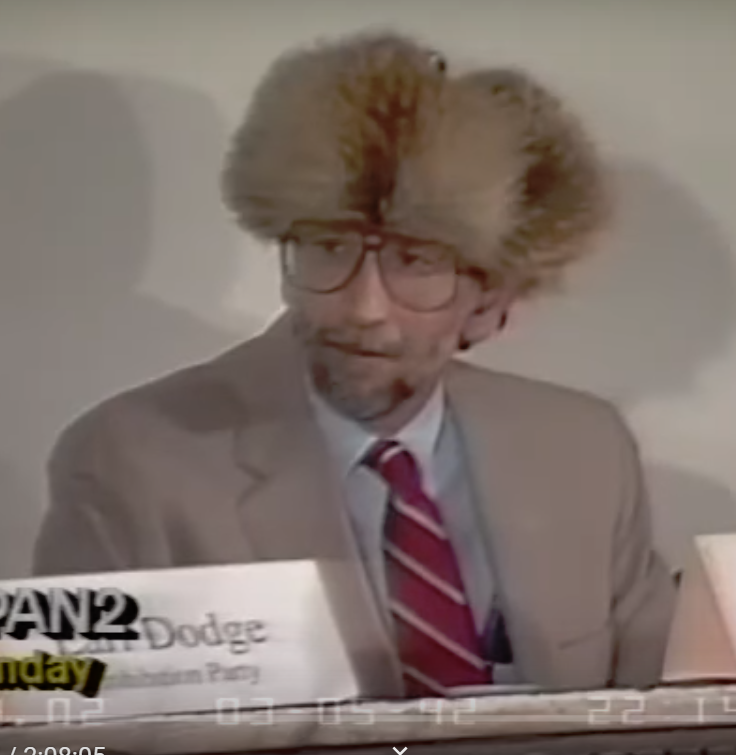 Guys…I present to you the single most bizarre Presidential Candidate in US history. I’ve seen and read about more than enough Presidential hopefuls to make that assessment, and really nobody else even comes close. This guy’s name is Michael S Levinson, and he’s what you’d get if you combined Charlie Kelly, Cosmo Kramer, and Walter Sparrow (from The Number 23) all in one. As far as I can tell, he’s been running in every election since 1980, but has been so under the radar that most people haven’t heard of him. He didn’t come up in my search for fringe candidates either–if it weren’t for the Independent Voters Party Debate from 1992 I never would have discovered him.

Now, strange third party candidates are a dime a dozen, and almost every cycle has them. However, what sets Michael Levinson apart from say, Pigasus, Vermin Supreme or Pat Paulsen, is that he doesn’t seem to be undertaking a form of performance art. In fact, he appears to be deathly serious about his candidacy and unusual policy ideas. Even stranger, he was able to not only participate in a third party debate in 1992, but during the ‘88 run he got a CSPAN interview and 30 minutes of airtime on New Hampshire public access TV. This video I’ll link to below is made up of clips from all three of those appearances, plus a news story from a later election cycle. I’m not gonna give away his positions, or highlights. You absolutely have to see for yourself to believe it. And for what it’s worth, I actually like some of his ideas myself, particularly his opinion on how we should reform the education system. It’s a long video, so surreal that it’s totally worth the time. This man needs to be seen and appreciated. He’s also still running for office as recently as 2018, albeit for Senate as opposed to President. So if his ideas appeal to you, please do show him your support.

I want to make it clear that this post isn’t intended to turn Michael Levinson into an object of ridicule. Admittedly his antics on the public access show are pretty funny, but mostly I’ve just never seen a candidate this unusual and I would like to raise awareness to it. Mr. Levinson is actually somewhat inspirational to me in that he doesn’t care what you or anyone else thinks of him, he just gets out there everyday and spreads a message that he sincerely believes in. He leaves ego at the door in favor of speaking his piece. I very much want to see more of that in the political arena. We could all stand to be a little more like Mike…but only a little. Our representatives should honestly speak their mind as opposed to pretending to be everything to everybody.