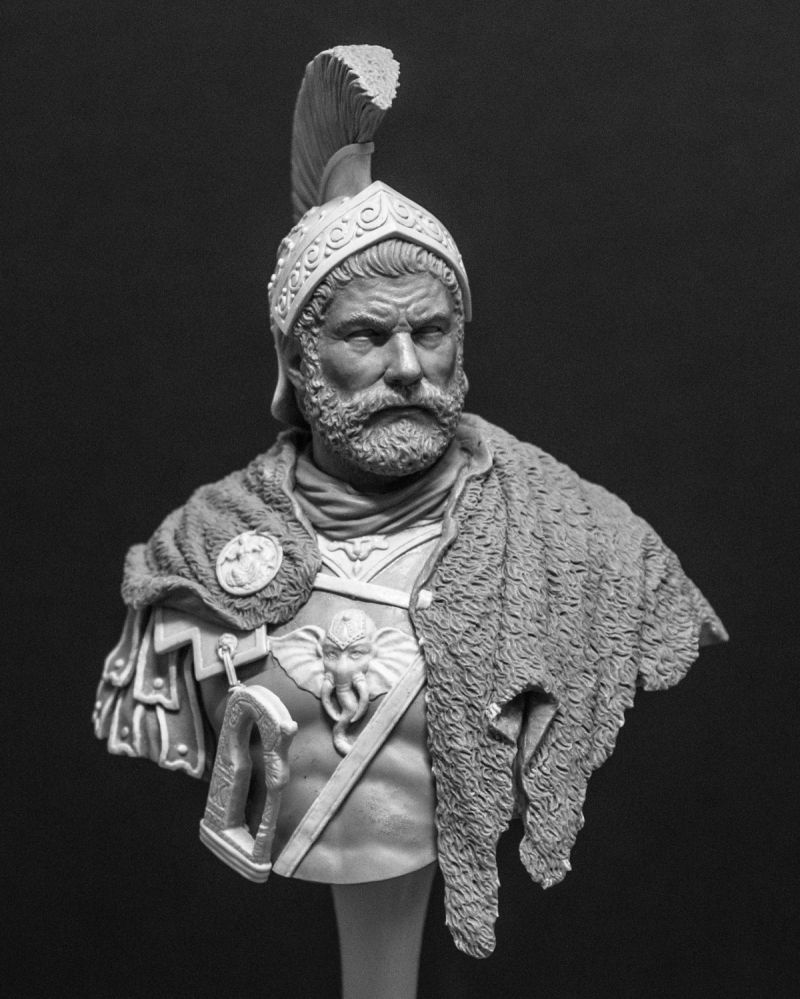 I’m not sure if I subscribe to the “great man theory” of history exactly. But I do know that holding countries, governments or institutions in high esteem is silly. Any grouping larger than the individual can only ever be as bad or good as the people that it’s comprised of. A team is only as strong as its weakest link, and a society is only as great as its most downtrodden resident.

The Terror of Italy

Nobody knows much about what Hannibal Barca really looked like, but the bust displayed in the header image above is my favorite depiction. On the backs of coins bearing his image, you’ll usually find either horses next to palm trees or Elephants. The elephants make sense, as Hannibal famously led Elephants across the Alps to invade the Italian peninsula–an unthinkable feat, even today. Unfortunately, I’m not sure what the significance of the horse and palm tree are. It may be an allusion to some Punic myth or Barcid family legend now lost to time.

Speaking of which, I cannot tell you how frustrated I am by the lack of available information on Carthage; everything we know about them was written by their bitter enemies. And needless to say, the Romans and Greeks didn’t care to preserve Carthage’s authentic history or intimate cultural heritage. Trying to find details online is tough. There’s some nuggets of information about their founding, government and a few scattered historical anecdotes. But mostly the field is dominated by the legacy of one man, Hannibal Barca.

Hannibal means “Grace of Baal” in Punic, and Barca is apparently their word for “lightning.” Supposedly his father, Hamilcar (general in the first Punic War) made the boy swear to hate Romans and do all he could to frustrate their expansion. Hannibal took this oath to heart, and after the first Punic War, invaded Spain to create new Carthaginian colonies as compensation for the loss of Sicily. It was Hannibal’s attack on Saguntum (a Roman ally) that more or less sparked the Second Punic War, which was almost certainly the greatest conflict of the Ancient Western World.

Supposedly, Hannibal’s plan was never to destroy Rome–at least not directly, but rather to inspire the Italian cities they had long since conquered to rebel against it. This would knock Rome back to where they had been before the First Punic War, as a small regional power limited to Italy, and reinstate the earlier balance between Carthage and Rome. It says a lot about Rome’s reputation for ruthlessness as well as how much its allies benefited from being part of the Roman system that none but a small handful ever joined Hannibal. Even after multiple defeats which would have utterly ruined any other civilization, Rome was able to bounce back stronger than before. The flaw in Hannibal’s strategy, like Pyrrhus before him, was underestimating the resolve of the Roman people to persevere in the face of catastrophe.

In this writer’s opinion, and I’ll admit I only know so much, it was Carthage itself that ultimately failed Hannibal. Despite sending an emissary back with a literal sackful of rings from the fallen Romans at Cannae, Carthage sent little aid to their champion. The real reason why Hannibal could not capitalize on his victories is because he lacked siege equipment. His brother Hasdrubal invaded Italy to bring him some, but was defeated in the Battle of Metaurus. This single battle, had it gone the other way, might have killed the future Roman Empire in its crib, and therefore is perhaps the single most pivotal conflict in European history. Now imagine if there had been other relief forces bringing supplies–one of them was bound to slip through especially if it had been attempted after Cannae when the city was at its lowest ebb.

Once Scipio Africanus assumed command of the Romans, the fight was eventually taken from Italy to Spain and then to Africa itself.  Hannibal was recalled to defend the homeland, and ultimately defeated at the Battle of Zama, leaving Carthage exposed. With no other options, Rome’s greatest adversary submitted to unconditional surrender and were forced to sign humiliating peace terms. 50 years later, the city that had sent Rome almost to capitulation was no more.

After the war, Hannibal went into public service and forced extensive political reforms until the Romans demanded he be handed over. Rather than face the music, Hannibal fled the city and spent the rest of his life outrunning Roman assassins. During his extended escape he went from place to place begging someone, anyone, to take up the struggle against Rome. Ultimately, the greatest general of his generation committed suicide by poison on the shore of the Sea of Marmara, leaving a note saying “Let us relieve the Romans from the anxiety they have so long experienced, since they think it tries their patience too much to wait for an old man’s death.”

Hannibal is easily the most famous of the Carthaginians today, and in my opinion, a man who was greater than his country itself. I say all that as someone completely enamored with Carthage and its history. Time would eventually immortalize Hannibal as one of only a handful of men in Rome’s history to make the city tremble. Given time, several from his adversarial culture would come to honor the man himself. An epic poem, albeit a poorly written one, called The Punica was written about his life and exploits 200 years later. Roman Emperor Septimius Severus, who was also born from the old Carthaginian territory, ordered his burial site to be covered with marble as a mark of respect.

Reading the book Carthage Must Be Destroyed by Richard Miles and many articles online, it’s my opinion Hannibal could’ve won the war if he had the full support of his state from the beginning, or at least after Cannae. Unfortunately, Carthage’s Council of 104 was stagnated by oligarchical factions which refused to compromise and many of whom frustrated Hannibal’s cause out of petty personal competition. (This foreshadows Caesar’s showdown with the patrician Optimates faction over one hundred years later in Rome.) My favorite anecdote from that book is how after the war, rather than be celebrated or mythologized like Achilles, Aeneas and Odysseus of old, both Hannibal and Scipio returned to mostly ungrateful countries who didn’t appreciate their extraordinary accomplishments and talents. As the author put it, the Age of Heroes was over, the time of great states was beginning. You know what happened to Hannibal, but Scipio Africanus was also continuously harassed by his political enemies, led by Cato the Elder. Scipio was left so embittered that he insisted on *not* being buried in Rome, and his burial inscription reads: “Ungrateful fatherland, you will not even have my bones!” He died the same year as Hannibal, coincidentally.

In terms of modern significance, Hannibal’s story mirrors that of Caesar’s. It is a non-Roman example of a man who was more far-sighted and great than his own state.

The Traitor of Italy

Honorius is the worst Emperor Rome ever had. The popularized choice for that honor is usually Nero, but we have to remember that a lot of the stories about him are exagerrated. I will talk about this more when I go into Elagabalus, but Nero and most Roman Emperors’ legacies were shaped by historical records left to us by the Senatorial class. Therefore, if a Roman Emperor displeased the Senate he could, and was, accused of all sorts of lecherous or immoral acts. Therefore, even though there’s evidence Nero was actually a popular leader among the poorer classes, most laypeople today remember him as cruel and sexually deviant. (Oh, and fiddling while Rome burned never happened either.)

When I first started studying Roman history in earnest (when I started High School) I delved into the supposed worst Emperors first. There were two that fascinated me the most–Elagabalus (who, again, I’ll talk about more later) and Honorius. At the time, I considered them the worst. However, as time’s gone on I’ve found myself more sympathetic to the former while I have yet to find anything which excuses the latter.

Honorius seems to have escaped notice by the general public, probably because his faults amount to doing nothing as opposed to doing psychopathic things like Caligula or Nero are accused of. But there are some great stories about him too. One of which mirrors the famous “fiddled while Rome burned.” According to the ancient historian Procopius, the Emperor fed his chickens as Rome was being sacked for the first time in 800 years by Visigoths in 410 CE. The Emperor resided in Ravenna at the time and was safe from harm, but the loss of the capitol to a foreign power shocked contemporaries, friend and foe alike. “The city that had taken the world was itself taken.” When he was told that Roma had perished, Honorius replied “How could that be, she just ate from my hand?” (he had a chicken named Roma, you see) and when it was explained that the *city* had fallen, he is said to have been incredibly relieved. Whether that exact anecdote ever happened or not is irrelevant; unlike Nero, whose actions disproved the slander his character endured, Honorius did ultimately fiddle away in Ravenna while his city suffered, whether he fed his chickens at the time or not. In essence, the spirit of the story is still true even if the exact details such as the chickens may not be.

While Honorius may not have governed as overtly cruel as Nero or Caligula are said to be, Honorius lived a long life and sat on his hands while the Empire collapsed all around him. Any hope Rome had of turning its fortunes around and regaining former glory were lost by the time of his death, and unlike many a better man of this era, he is said to have passed peacefully. Ironically, the German Foederati who led the Visigoths in battle was said to have been fascinated by Roman history and past prestige. His name was Alaric but he insisted on being called Alaricus in the Latin style. In fact, his motivation for attacking the city was that he had been denied a leadership position in the Roman army. In many ways Alaricus was more Roman than the Emperor himself. So you see, it’s not a birthplace or rank in any institution that makes a person great, it’s their actions and motivations. This isn’t the only example, it’s just the most stunning one I’m personally aware of.

One detail about the Fall of Carthage I find striking is how Scipio Aemilianus, leader of Roman troops in the Third Punic War, is said to have wept as Carthage burned. When asked why, he replied that the death of all cities was inevitable and he knew Rome would one day suffer the same fate. Imagine his grief if he could have seen the future Emperor, who purposefully did nothing in the city’s most dire hour. It’s incredible to think about, just how completely Rome had deteriorated since its glory days of the late Republic and Principate. The ashes of Augustus and the earlier pagan Emperors in the Mausoleum of Augustus are said to have been scattered during the sack. If you ask me, it’s a fitting accompaniment to the event which marks the end of Rome as uncontested world power, and the desolation of everything Augustus had worked for.

In conclusion, there are no inherently great countries, institutions or families–all groupings beyond the Individual are only as great or poor as the Individuals currently running them. Having excessive, unfounded pride in a Nation or an organization just because you were born there or told to do so is foolish. All loyalty and praise belongs to the people who put in the work and make good decisions which allow institutions to prosper in the first place.