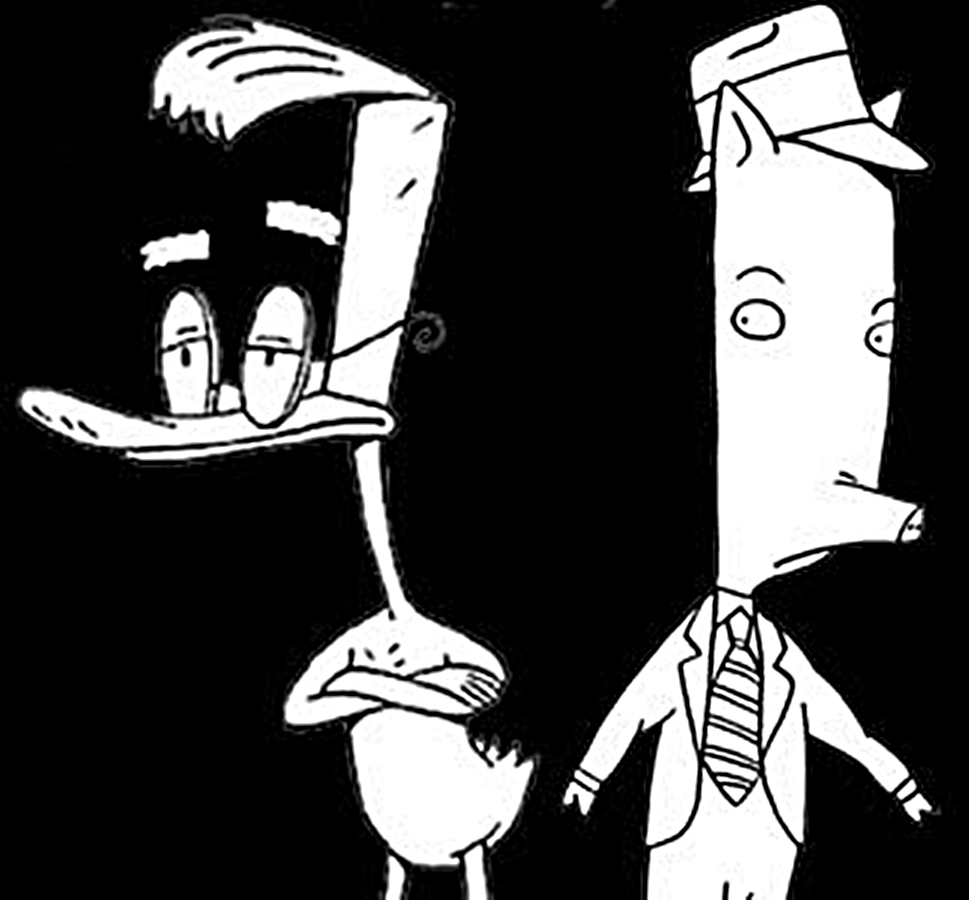 I love Duckman. It’s such an unapologetically irreverent program, both in terms of writing and the art style. In my opinion, Duckman doesn’t get the credit it deserves for helping to establish the birth of adult cartoons on TV. The conventional wisdom is that it all stems back from The Simpsons, and far be it from me to try to downplay the importance of that show. However, by today’s standards Simpsons is comparatively tame, while many Duckman jokes or plotlines shocked me for their depravity (in a good way.) You can even see specific gags that Duckman did first but doesn’t get the credit for, like killing two characters in multiple episodes (Fluffy & Uranus) several years before South Park started killing Kenny.

There’s a lot more I could say about the program, but for right now, I’d like to focus on Cornfed Pig, Duckman’s partner in the private investigator business. Throughout the series, Duckman himself is a brash, crude and selfish person while Cornfed is competent, wise and measured. It’s the classic odd couple pairing, and like most of them, you’re left to wonder why the two stay together. Cornfed could seemingly do so much better than Duckman, so why does he stay with this unscrupulous person?

Let’s start by looking at this scene from the episode With Friends Like These, where Duckman decides to branch out from just talking to Cornfed and meet new people. He eventually gets in with a bunch of Friends parodies. It’s notable for showing that Cornfed needs Duckman more than the audience might assume at first glance:

[Scene fades in on Cornfed looking forlornly at a picture of himself and Duckman on his desk. Duckman walks in, Cornfed hurriedly picks up the phone]

Cornfed: “What’s that Jean-Claude, a karate chopping free-for-all in Brussels? Gee I don’t know, hundreds of other friends want me to do neat things with them too…”

Cornfed: That was just another of my many friends. Nothing for you to get jealous about.

Cornfed: [visibly upset] …Yes…Haven’t seen much of you lately.

Duckman: Hey, hanging out with the gang is a full-time job. Ohh, those guys!

Cornfed: But looky what I’ve got—ringside seats for tonight’s Foxy boxing title bout. If we’re lucky we may be sweated upon. Maybe even catch a tooth!

Duckman: Female fisticuffs?! Cornfed, I happen to have friends who are women! [tears up tickets]

Cornfed: I…I’m sorry Duckman. It’s just that you haven’t been around lately and to be honest, you really mean a lot to me and I miss you…

[Duckman interrupts him to talk about how great his new friends are before exiting the scene again. You get the point.]

With Cornfed, one of the running gags of the show Duckman is how he’s well-traveled, well-versed in a multitude of different fields and seems to have all his shit together. He volunteers at a multitude of places. He’s a genius who solves all the cases. He looks great in a dress. He’ll mention offhand that the reason he’s great at basketball is because he was “once kidnapped by a kickboxing ninja who forced his captives nightly to play a deadly game of steel cage basketball where the losers were beheaded” for example.

And yet, throughout the show when the subject of women comes up, Cornfed always sheepishly admits that he’s a virgin, and he has no one else in his life except Duckman. Obviously the “real world” reason for this is that Cornfed’s a sidekick who exists mostly as a foil for Duckman’s vapid life and constant lust for almost any woman he sees. But for those of us with no lives and way too much time on our hands to think about these things, it’s an interesting conundrum.

With this scene quoted above, it’s really sad that this guy who has so many skills to impress people, so many interesting stories to tell, who’s survived so much, is lonely enough to settle for a shitty friend like Duckman. For whatever reason, Cornfed is incapable of moving on and developing his own personal life, or find a woman who makes him happy. And because of this, Duckman, the most incompetent person in the show’s universe, is then the only one who could hurt Cornfed. Nothing hurts more than being neglected by those you care about, especially if you were there for them at their lowest point and they turned on you as soon as they had other options. The person in a relationship who cares the least has all the power, as unfortunate as that is.

Personally, I like to imagine that Cornfed has been bouncing around so many wacky adventures all his life that he just hasn’t had much time to be social. As a result, he imprinted on someone who took an interest in him and clung on for dear life. Or Cornfed realizes that Duckman is a troubled person who needs help and decided his talents were best served making sure this goofball had someone to fall back on. It’s shown that Duckman was a much better person when his wife Beatrice was alive, and I like to think Cornfed knew and loved that Duckman, and wants to help bring him out again by being there through this rough patch in his life.

Duckman famously ended on a wide-open twist cliffhanger where, it turns out, Duckman’s long-deceased wife Beatrice was actually alive the entire time. Not only that, she reveals that Cornfed knew all along and she expected him to tell Duckman. For his part, Cornfed even acknowledges that this is the truth. To this day, the show’s creator has refused to explain his original plan for how to continue this shocking story arc.

Personally, I don’t see how it could have been done without utterly destroying Duckman and Cornfed’s balanced dynamic. There’s no plausible scenario where Cornfed (the voice of reason, the problem-solver, the gentleman) allows his friend to suffer in loneliness for so long without a reprieve. Not only that, but Duckman has children who’ve missed their mother all this time. How could Cornfed allow them to go through the traumatic experience of losing their mom if he knew she was still alive? This revelation destroys my theory of Cornfed sticking around to help Duckman. If Cornfed put up with Duckman’s erratic and often abusive behavior while knowing Beatrice was alive, it means he wasn’t a good man trying to give his friend the benefit of the doubt. Instead, it either means that Duckman was always like this even when his wife was around, or Cornfed has watched his friend hit rock bottom and hasn’t done the one thing which might snap him out of his self-destructive funk. Either possibility destroys the underlying soft side to both characters–it just makes them too dysfunctional and/or mean-spirited.

If Duckman was always such a womanizing and lecherous person around Beatrice, that also ruins some of the shows sweetest moments. Consistently throughout the show’s run, anytime the subject of Beatrice came up in any way, Duckman would suddenly become quiet, reverent and sweet. She clearly brought out the best in her husband and made him strive to be worthy of her. I always imagined that Duckman was a much more ambitious and refined man when she was alive, and to believe otherwise implies that Beatrice herself isn’t so great for choosing to live with such a person in the first place. That would also imply that Cornfed doesn’t hang out with Duckman because he knows there’s a better man waiting to come out again. It would mean that Cornfed just has nowhere else to go, or thinks he deserves the bad treatment that he gets from his boss. Duckman could be a reprobate show, even bordering on depraved at times, but it always had a heart; the characters were always sympathetic underneath their harsh exterior. The implications of Beatrice being alive the whole time breaks these delicate characterizations.